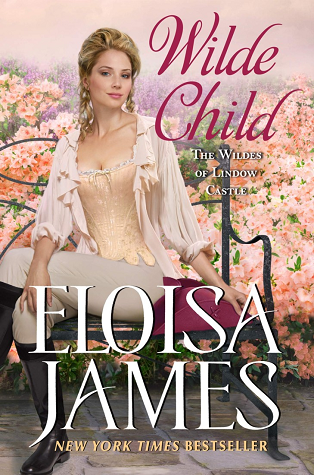 He wants a prim and proper duchess, not the Wildest of the Wildes! Already notorious for the golden hair that proves her mother’s infidelity, Lady Joan can’t seem to avoid scandals, but her latest escapade may finally ruin her: she’s determined to perform the title role of a prince—in breeches, naturally.

She has the perfect model for an aristocratic male in mind: Thaddeus Erskine Shaw, Viscount Greywick, a man who scorned the very idea of marrying her. Not that Joan would want such a dubious honor, of course.

For years, Thaddeus has avoided the one Wilde who shakes his composure, but he’s horrified when he grasps the danger Joan’s putting herself in. Staring into her defiant eyes, he makes the grim vow that he’ll keep her safe.

He strikes a bargain: after one performance, the lady must return to her father’s castle and marry one of three gentlemen whom he deems acceptable. Not including him, of course.

About the author: Eloisa James is a USA Today and New York Times bestselling author and professor of English literature, who lives with her family in New York, but can sometimes be found in Paris or Italy. She is the mother of two and, in a particularly delicious irony for a romance writer, is married to a genuine Italian knight. Visit her at www.eloisajames.com.

Wilde Child is the sixth book in The Wildes of Lindow Castle series by Eloisa James. A steamy historical romance that sweeps you away to another place, another time. The characters are well-written, with intriguing backstories that help to bring the storyline to life. A story full of steamy passion, undeniable chemistry, family, and lots of drama. While this is part of The Wildes of Lindow Castle series it can easily be read as a standalone novel. *I received a complimentary copy in exchange for a review.*