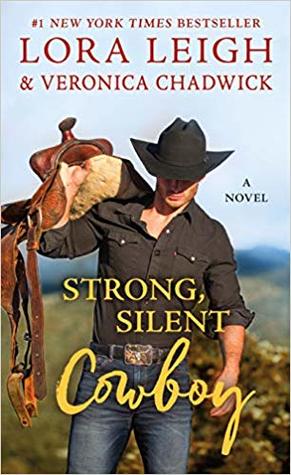 Strong, Silent Cowboy (Moving Violations #2) by Lora Leigh and Veronica Chadwick – He Will Do Anything.. To Keep Her Safe…

Sallie Hamblen had three incredibly hot, sexy nights with Jacob Donovan, an undercover CIA agent, before he disappeared, leaving her broken-hearted and forever yearning for the man she lost. Years later, Jacob doesn’t know that the beauty he’s about to seduce in a small town bar is the woman he held in his arms all those years ago… and that she’s on the run from her past.

Former CIA agent turned cowboy, Jacob Donovan wants nothing more than a simple life. Just the ranch and occasionally someone warm and sweet in his bed. Until Sallie comes back into his life and all of a sudden he wants to be in her bed every night…all night. When he discovers that her life is in danger, he swears he’ll protect her. Even when secrets are revealed that threaten everything between them, he will lay everything on the line to keep her in his arms.

Veronica Chadwick: My life has been a bit chaotic for a while now. We lost my step father in May and my mother was seriously injured in a fall later that month. I had every intention of posting a blog about RAW. (It was wonderful by the way) However I wasn’t home long before my mother needed emergency surgery for a stomach issue. She came through it very well and is on the mend.

Lora Leigh: Lora Leigh lives in the rolling hills of Kentucky, often found absorbing the ambience of this peaceful setting. She dreams in bright, vivid images of the characters intent on taking over her writing life, and fights a constant battle to put them on the hard drive of her computer before they can disappear as fast as they appeared. Lora’s family, and her writing life co-exist, if not in harmony, in relative peace with each other. Surrounded by a menagerie of pets, friends, and a teenage son who keeps her quick wit engaged, Lora’s life is filled with joys, aided by her fans whose hearts remind her daily why she writes.

Strong, Silent Cowboy is the second book in the Moving Violations series by Lora Leigh and Veronica Chadwick. A steamy cowboy romance full of drama, undeniable chemistry, and family. This well-written unforgettable romance is sure to sweep you off your feet and leave you wanting more! *I received a complimentary copy in exchange for a review.*