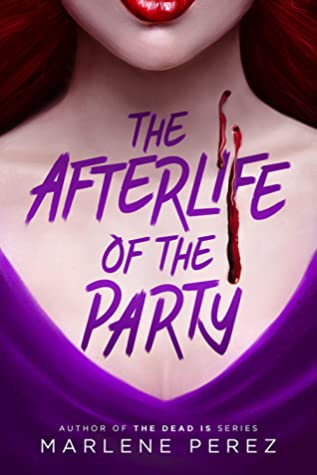 The Afterlife of the Party (Afterlife #1) by Marlene Perez – The bestselling author of the Dead Is… series is back with a snarky, hilarious take on the vampire romance novel.

When my best friend Skyler told me about this party in the Hollywood Hills, I was less than enthused. As it turned out, my feelings were more than justified. That party ruined my life.

Tansy didn’t even want to go to the party. It’s hard enough living in one of your best friend’s shadows and secretly in love with your other best friend. And now she’s leaving it a vampire.

Now her best friend Skyler is stuck on the road trip from hell, on tour as a groupie with a literal band of vamps. Tansy sets out with Vaughn, her other BFF turned maybe more, to save Skylar’s life and take down the band. But when they find themselves in the middle of a vampire war, will Tansy be able to make the ultimate sacrifice to save her friends?

About the Author: Marlene Perez is the author of paranormal and urban fantasy books, including the best-selling DEAD IS series for teens. The first book in the series, DEAD IS THE NEW BLACK, was named an ALA Quick Pick for Reluctant Young Adult Readers as well as an ALA Popular Paperback. The first three books in the series have been optioned by Disney for television.

She grew up in Story City, Iowa and is the youngest of twelve children. She lives in Orange County, California with her husband and children. Visit Marlene at www.marleneperez.com.

Review of The Afterlife of the Party

The Afterlife of the Party is the first book in the Afterlife series by Marlene Perez. A young adult fantasy that pulled me in straight away. This was a fun and lighthearted paranormal read that is sure to take you away to another time, another place.  The slow-burn romance brewing between the characters is entirely swoon-worthy. Looking forward to the next book in this series! *I received a complimentary copy in exchange for a review.*