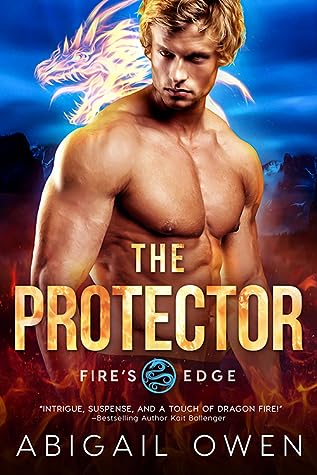 The Protector (Fire’s Edge #4) by Abigail Owen – The cousin of the High King, Lyndi Chandali has lived with the constant threat of being pawned off as a political prize. A rare, female-born dragon like Lyndi can’t truly mate—not in the way it counts. Which is why she’s kept her distance from a certain sinfully delicious Beta. Instead, she’s built a life for herself giving orphaned dragons in the Americas a home.

As Beta of his team of enforcers, Levi Rowtag is a fighter first, last, and always. His job is to protect—his team, the shifters in his territory, and the stubborn woman hell-bent on fighting with him at every turn. He knows from the moment they first meet what she’ll never accept—they are destined to be mated.

But with the kings at war, the enemy is now coming for Lyndi. Worse, he’s coming for her orphans, too. He’ll have no choice but to defy his king and go rogue if he has any hope of protecting them all…and finally claiming his mate.

Abigail grew up consuming books and exploring the world through her writing. She attempted to find a practical career related to her favorite pastime by earning a degree in English Rhetoric (Technical Writing) and an MBA. However, she swiftly discovered that writing without imagination is not nearly as fun as writing with it. She currently resides in Austin, Texas, with her own personal, swoon-worthy hero and their two children, who are growing up way too fast. www.abigailowen.com

Review of The Protector

The Protector is the fourth book in the Fire’s Edge series by Abigail Owen. A story full of heated passion, undeniable chemistry, drama, and deadly turmoil. The Protector is part of a series but can easily be read as a standalone novel. However, once you read The Protector you will want to read the other books in the Fire’s Edge series. Deadly turmoil and the fires of passion burn bright. Once again, Abigail Owen’s captivating is so intriguing it pulls you into a world of fantasy, mystery, and intrigue.  *I received a complimentary copy in exchange for a review.*