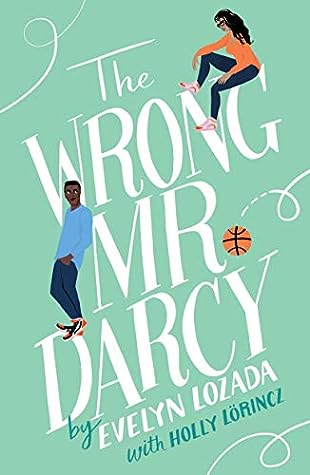 The Wrong Mr. Darcy by Evelyn Lozada & Holly Lörincz – In this lightly inspired Pride and Prejudice romantic comedy, two unlikely people discover the error of judging by first impressions and the beauty of family, friendship, and love. This book will entice you through the last page.

Hara Isari has big ambitions and they won’t be sidetracked by her mother’s insisting that she settle down soon. She dreams of leaving her small-town newspaper behind, as well as her felon father, and building a career as a sports writer, so when she is chosen to exclusively interview a basketball superstar, she jumps at the chance. It’s time to show the bigwigs what she’s truly made of.

At the same time, she meets a rookie on the rise, Derek Darcy. Darcy is incredibly handsome, obnoxiously proud, and has a major chip on his shoulder. Hara can’t think of a man more arrogant and infuriating. However, fate keeps bringing them together—from locker rooms to elegant parties, to the storm of the century—and what begins as a clash might just be more complicated than Hara anticipated. When she begins to see Darcy in a new light, Hara is not quite sure if she should drop the ball or play the love game.

About the Author(s): (from goodreads.com) Evelyn Alexandra Lozada is an American television personality, model, and spokesperson. Lozada was one of the five main cast members in the VH1 reality series Basketball Wives throughout its run. Lozada is set to return to the cast of the sixth season of the series.

Review of The Wrong Mr. Darcy

There are beautiful quotes from Pride and Prejudice that introduce each chapter perfectly; our hero is not Mr. Darcy from Austen’s novel. While he has a similar personality, he is an entirely different character yet equally romantic. Our heroine is similar to Elizabeth, but she is a beautiful character who finds her way without losing her compass. The Wrong Mr. Darcy is a fun, fast-paced read with a sports theme that is sure to sweep you off your feet. A well-written, well-developed story! *I received a complimentary copy in exchange for a review.*