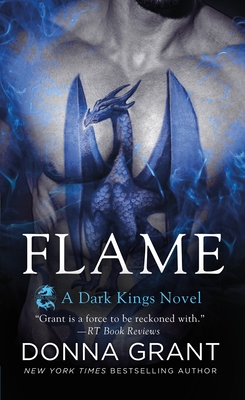 Flame (Dark Kings #17) by Donna Grant – If she believed in destiny, she would believe they were meant for each other. But that fire was put out long ago. . .

Living among the Dragon Kings, Cain has spent lifetimes learning to distrust both mortals and Fae. He is a warrior born—and every instinct demands that he fight to keep his own kind safe. But when a fringe member of the Dark Fae contacts the Kings with an urgent warning, Cain is torn for the first time. How can he trust this beautiful creature when resisting his primal attraction to her is battle enough?

Noreen is horrified by what her kind and the malevolent Others are planning for the Dragon Kings. Dark Fae or not, there are lines she will not cross—even if it means risking her life. But she never imagined that she would risk her heart until she meets Cain. She wants him with a soul-deep desire that frightens her…and endangers them both. Is saying goodbye to everything Noreen has ever known worth a love that will span time and realms?

About the Author: Donna is the New York Times and USA Today bestselling author of over a hundred novels. Her most popular series is the breathtaking Dark King (aka Dragon King) series featuring dragons, immortal Highlanders, and the Fae.

In addition to her novels, Donna has written short stories, novellas, and novelettes for digital-first and print release. She has been dubbed as giving the “paranormal genre a burst of fresh air” by the San Francisco Book Review. Her work has been hailed as having “deft plotting and expert characterization” by Publisher’s Weekly and “sizzling” by RT Book Reviews.

The highly anticipated seventeenth book in the Dark Kings series by Donna Grant is titled Flame. A steamy paranormal fantasy that can easily be read as a standalone novel. An addictive series that pulls you in keeping you second-guessing and just when you think you have it figured out the author yanks it all out of reach. The Dark Kings series will have you holding your breath as it takes you on an emotional roller coaster. Flame is a summer must-read! *I received a complimentary copy in exchange for a review.*