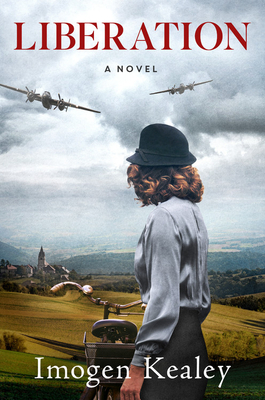 Liberation by Imogen Kealey – Hero. Soldier. Spy. Leader. Her name is Nancy Wake. To the Allies, she was a fearless freedom fighter, a special operations legend, a woman ahead of her time. To the Gestapo, she was a ghost, a shadow, the most wanted person in the world.

But at first, Nancy Wake was just another young woman living in Marseilles and recently engaged to a man she loved. Then France fell to the Nazi blitzkrieg. With her appetite for danger, Nancy quickly finds herself drawn into the underground Resistance standing up to Nazi rule. Gaining notoriety as the White Mouse, with a 5-million-franc bounty hanging over her head, Wake rises to the top of the Nazi’s Most Wanted list–only to find her husband arrested for treasonous activity under suspicion of being the White Mouse himself.

Narrowly escaping to Britain, Wake joins the Special Operations Executive (SOE) and parachutes into the Auvergne, where she must fight for the respect of some of the toughest Resistance fighters in France. As she and her maquisards battle the Nazis, their every engagement brings the end of the war closer–but also places her husband in deeper peril.

A riveting, richly imagined historical thriller, LIBERATION brings to life one of World War II’s most fascinating unsung heroines in all her fierce power and complexity. This is the story of one of the one of the war’s most decorated women, told like never before.

About the Author: Imogen Kealey is the pseudonym of American screenwriter Darby Kealey and British novelist Imogen Robertson, who bonded over their desire to tell Wake’s story.

Liberation is an intriguingly captivating novel telling the story of SOE captain and heroine Nancy Wake. A story that focuses on Nancy’s activities in the Resistance during 1943 and 1944. This heart-wrenching story of courage and bravery that was brought on by hardship and suffering. Kealey writes a story full of mystery and intrigue with well-written characters. Liberation is a lovely read for fans of historical fiction. *I received a complimentary copy in exchange for an honest review.*