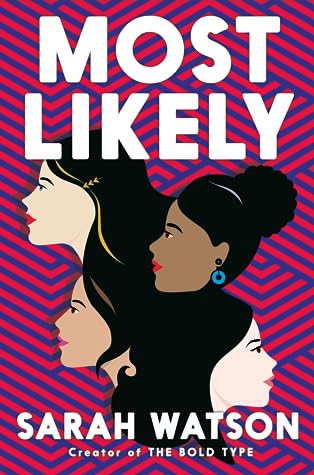 Most Likely (Most Likely #1) by Sarah Watson – From the creator of the hit TV series The Bold Type comes an empowering and heartfelt novel about a future female president’s senior year of high school.

Ava, CJ, Jordan, and Martha (listed in alphabetical order out of fairness) have been friends since kindergarten. Now they’re in their senior year, facing their biggest fears about growing up and growing apart. But there’s more than just college on the horizon. One of these girls is destined to become the president of the United States. The mystery, of course, is which girl gets the gig.

Is it Ava, the picture-perfect artist who’s secretly struggling to figure out where she belongs? Or could it be CJ, the one who’s got everything figured out…except how to fix her terrible SAT scores? Maybe it’s Jordan, the group’s resident journalist, who knows she’s ready for more than their small Ohio suburb can offer. And don’t overlook Martha, who will have to overcome all the obstacles that stand in the way of her dreams.

This is the story of four best friends who have one another’s backs through every new love, breakup, stumble, and success–proving that great friendships can help young women achieve anything…even a seat in the Oval Office.

About the author: (from goodreads.com) Sarah Watson is the creator of the hit TV series The Bold Type, which the New York Times described as “Sex and the Single Girl for millennials.” Previously she was a writer and executive producer of the critically acclaimed NBC drama Parenthood. She lives in Santa Monica, California. Most Likely is her debut novel.

Review of Most Likely

Most Likely is a captivating young adult novel by Sarah Watson.  From the creator of the hit TV series The Bold Type comes an empowering and heartfelt novel about a future female president’s senior year of high school.  A compelling story that is more than just a cheesy filled book of female friendship. You will get pulled into a world of four girls, best friends, at the end of high school. One of them will be President of the United States. Goodluck figuring out which friend will be President! Full of hope, love, friendships, challenges of growing up, and mystery. Most Likely is a fun, breezy, but also meaningful read. *I received a complimentary copy in exchange for an honest and unbiased review.*