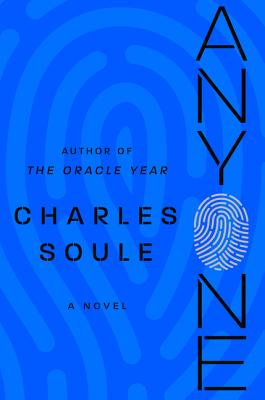 Anyone by Charles Soule – Charles Soule brings his signature knowledge—and wariness–of technology to his sophomore novel set in a realistic future about a brilliant female scientist who creates a technology that allows for the transfer of human consciousness between bodies, and the transformations this process wreaks upon the world.

Inside a barn in Ann Arbor, Michigan, a scientist searching for an Alzheimer’s cure throws a switch—and finds herself mysteriously transported into her husband’s body. What begins as a botched experiment will change her life—and the world—forever…

Over two decades later, all across the planet, “flash” technology allows individuals the ability to transfer their consciousness into other bodies for specified periods, paid, registered and legal. Society has been utterly transformed by the process, from travel to warfare to entertainment; “Be anyone with Anyone” the tagline of the company offering this ultimate out-of-body experience. But beyond the reach of the law and government regulators is a sordid black market called the darkshare, where desperate “vessels” anonymously rent out their bodies, no questions asked for any purpose – sex, drugs, crime… or worse.

Anyone masterfully interweaves the present-day story of the discovery and development of the flash with the gritty tale of one woman’s crusade to put an end to the darkness it has brought to the world twenty-five years after its creation. Like Blade Runner crossed with Get Out, Charles Soule’s thought-provoking work of speculative fiction takes us to a world where identity, morality, and technology collide.

About the author: (from Goodreads,com) Based in Brooklyn, New York, New York Times bestselling author Charles Soule is a writer of novels (graphic and otherwise), comics, screenplays and stories of all types. He plays the guitar fairly well and speaks at least one language.

Born in the Midwest, he spent his early years in Michigan before moving to Asia, where he spent time living in Hong Kong, Manila and Singapore. Stints on the East Coast followed, before settling in New York (apparently) for the long haul.

He is the author of the novel THE ORACLE YEAR, published in April 2018 by HarperCollins’ Harper Perennial imprint, as well as many titles for Marvel, DC, Image and other comics publishers, including Death of Wolverine, She-Hulk, Darth Vader, Lando, Curse Words, Letter 44 and long runs on Daredevil, Swamp Thing and Inhuman. Learn more at www.charlessoule.com

Anyone by Charles Soule is a captivating sci-fi fantasy that is sure to pull you into a world unlike any other and hold your attention until the very end. An intriguing story that switches back and forth between current day and 25 years in the future. A story about tech that transfers consciousness into another human. Anyone pulls you in from the beginning and holds your attention until the end with shocking twists and turns. A story that is sure to stay with you long after reading. *I received a complimentary copy in exchange for an honest and unbiased review.*