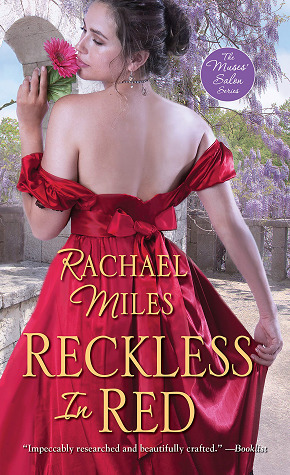 Lena Frost is a force to be reckoned with. A woman who has made her way in society without family or fortune, she’s about to realize her first big success as an artist… Until her business partner makes off with her money, leaving her with little more than her hopes—and a dead body in her studio. Now Lena is at the mercy of a strikingly handsome stranger demanding answers she dare not reveal…

Is it her seductive eyes, or his suspicion that she’s up to no good that have Clive Somerville shadowing Lena’s every move? Either way, his secret investigation for the Home Office has him determined to uncover Lena’s hidden agenda. But the closer he gets to her, the more he longs to be her protector. Is she a victim of circumstance? Or a dark force in a conspiracy that could destroy everything Clive holds dear? Discovering the truth could have dire consequences, not only for Lena, but for his heart…

About the author: (from goodreads.com) Rachael Miles has always loved a good romance, especially one with a bit of suspense and preferably a ghost. She was also a professor of book hi

story and nineteenth-century literature whose students frequently found themselves reading the novels of Ann Radcliffe and other gothic tales. A native Texan, Rachael lives in upstate NY with her indulgent husband, three rescued dogs and an ancient cat. www.rachaelmiles.com

Review of Reckless in Red

The highly anticipated fourth book in The Muses’ Salon series by Rachael Miles is titled Reckless in Red. A historical romance that is sure to sweep you off your feet with steamy romance! The characters are complex and intriguing,  sure to engage your emotions while you invest in their lives and happiness. Miles is a remarkable storyteller and it shows in her writing. She weaves together a hint of mystery and danger into a historical romance that will have you turning the pages quickly. The perfect blend of mystery, romance, and intrigue. I can’t wait to read the next book in The Muses’ Salon series. *I received a complimentary copy in exchange for an honest and unbiased review.*

One thought on “Reckless in Red: The Muses’ Salon #4 by Rachael Miles – Review”