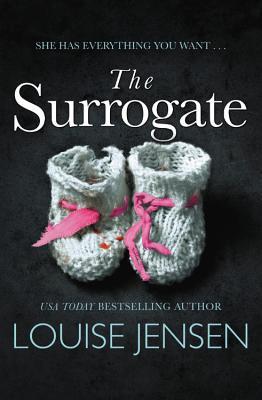 The Surrogate by Louise Jensen – ‘You know that feeling? When you want something so badly, you almost feel you’d kill for it?’

Be careful what you wish for…

Kat and her husband Nick have tried everything to become parents, and are on the point of giving up. Then a chance encounter with Kat’s childhood friend Lisa gives Kat and Nick one last chance to achieve their dream.

But Kat and Lisa’s history hides dark secrets. And there is more to Lisa than meets the eye.

As dangerous cracks start to appear in Kat’s perfect picture of happily-ever-after, she realises that she must face her fear of the past to save her family…

About the author: (from Amazon.com) Louise Jensen has sold over a million English language copies of her International No. 1 psychological thrillers The Sister, The Gift, The Surrogate and The Date. Her novels have also been translated into twenty-five languages, as well as featuring on the USA Today and Wall Street Journal Bestseller’s List. Louise’s fifth thriller, The Family, will be published in Autumn 2019 by Harper Collins.

Louise lives with her husband, children, madcap dog and a rather naughty cat in Northamptonshire. She loves to hear from readers and writers.

Review of The Surrogate

The Surrogate by Louise Jensen is a captivating mystery suspense thriller that is sure to keep you guessing until the end! A story full of drama, surprises, twists, and turns that will keep you turning page after page never knowing who’s to blame. The characters are relatable but unlikeable and hard to trust. This provides many surprises that are sure to keep you on the edge of your seat. There are so many secrets that keep you turning the pages making the suspense build and build until the shocking end. I was so intrigued! *I received a complimentary copy in exchange for an honest and unbiased review.*