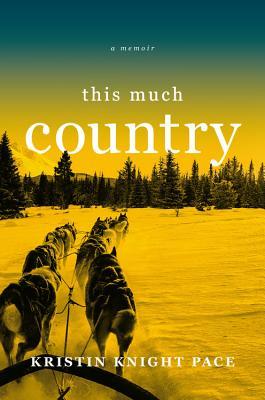 This Much Country
by Kristin Knight Pace

A memoir of heartbreak, thousand-mile races, the endless Alaskan wilderness and many, many dogs from one of only a handful of women to have completed both the Yukon Quest and the Iditarod.

In 2009, after a crippling divorce that left her heartbroken and directionless, Kristin decided to accept an offer to live at a friend’s cabin outside of Denali National Park in Alaska for a few months. In exchange for housing, she would take care of her friend’s eight sled dogs.

That winter, she learned that she was tougher than she ever knew. She learned how to survive in one of the most remote places on earth and she learned she was strong enough to be alone. She fell in love twice: first with running sled dogs, and then with Andy, a gentleman who had himself moved to Alaska to heal a broken heart.

Kristin and Andy married and started a sled dog kennel. While this work was enormously satisfying, Kristin became determined to complete the Iditarod — the 1,000-mile dogsled race from Anchorage, in south central Alaska, to Nome on the western Bering Sea coast.

THIS MUCH COUNTRY is the story of renewal and transformation. It’s about journeying across a wild and unpredictable landscape and finding inner peace, courage and a true home. It’s about pushing boundaries and overcoming paralyzing fears. 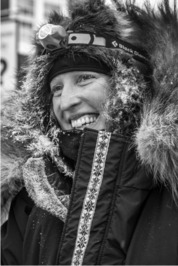 About the author: Kristin Knight Pace, 35, was born and raised in Ft. Worth, TX. After graduating with honors from The University of Montana with a degree in photojournalism, she had several jobs in the publishing industry in Montana and Seattle. After a heartbreaking divorce, she moved to Alaska in 2009 with her two dogs. That winter, she took care of a sled dog team and a remote cabin in the Alaska Interior. She fell in love with dog mushing, and with a wonderful man, Andy, who had also moved to Alaska to heal from heartbreak. Together, the two of them started Hey Moose! Kennel, a long-distance racing kennel made up of 30 loving dogs on ten acres outside Denali National Park. Kristin has since finished both the Yukon Quest and Iditarod Trail 1,000-mile sled dog races. She also has become a mother to a rambunctious and spirited daughter. www.kristinknightpace.com   – Amazon   –   Goodreads

Review of This Much Country

This Much Country is a heartfelt fast-paced read that is sure to tug at your heartstrings. A memoir that tells the heartbreaking story of  Knight Pace’s  20s and 30s as she goes through the heartache of divorce and finds the strength to journey to Alaska. There she discovers dog mushing and finds love with being on her own with the dogs. She takes on two 1,000 mile dog sled races: the Yukon Quest and the Iditarod.  Follow along as she shares detailed accounts of the races and the obstacles that tried to stand in her way. You will fall in love with the wilderness, the dogs and one woman’s determination to bet the odds. An intriguing read that is ideal for those who love reading about survival.   ** I received a complimentary copy in exchange for my honest and unbiased review. This post contains affiliate links and I will be compensated if you make a purchase after clicking on my links.**