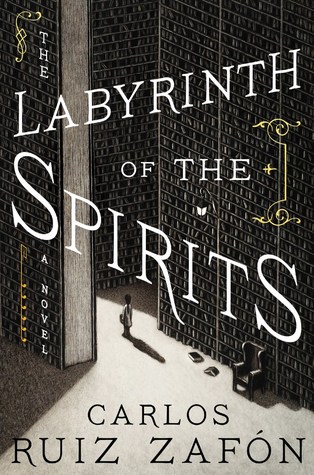 The Labyrinth of the Spirits by Carlos Ruiz Zafón – publication date September 18th, 2018 by Harper.

The internationally acclaimed New York Times bestselling author returns to the magnificent universe he constructed in his bestselling novels The Shadow of the Wind, The Angel’s Game, and The Prisoner of Heaven in this riveting series finale—a heart-pounding thriller and nail-biting work of suspense which introduces a sexy, seductive new heroine whose investigation shines a light on the dark history of Franco’s Spain. In this unforgettable final volume of Ruiz Zafón’s cycle of novels set in the universe of the Cemetery of Forgotten Books, beautiful and enigmatic Alicia Gris, with the help of the Sempere family, uncovers one of the most shocking conspiracies in all Spanish history.

Nine-year-old Alicia lost her parents during the Spanish Civil War when the Nacionales (the fascists) savagely bombed Barcelona in 1938. Twenty years later, she still carries the emotional and physical scars of that violent and terrifying time. Weary of her work as investigator for Spain’s secret police in Madrid, a job she has held for more than a decade, the twenty-nine-year old plans to move on. At the insistence of her boss, Leandro Montalvo, she remains to solve one last case: the mysterious disappearance of Spain’s Minister of Culture, Mauricio Valls.

With her partner, the intimidating policeman Juan Manuel Vargas, Alicia discovers a possible clue—a rare book by the author Victor Mataix hidden in Valls’ office in his Madrid mansion. Valls was the director of the notorious Montjuic Prison in Barcelona during World War II where several writers were imprisoned, including David Martín and Victor Mataix. Traveling to Barcelona on the trail of these writers, Alicia and Vargas meet with several booksellers, including Juan Sempere, who knew her parents.

As Alicia and Vargas come closer to finding Valls, they uncover a tangled web of kidnappings and murders tied to the Franco regime, whose corruption is more widespread and horrifying than anyone imagined. Alicia’s courageous and uncompromising search for the truth puts her life in peril. Only with the help of a circle of devoted friends will she emerge from the dark labyrinths of Barcelona and its history into the light of the future.

In this haunting new novel, Carlos Ruiz Zafón proves yet again that he is a masterful storyteller and pays homage to the world of books, to his ingenious creation of the Cemetery of Forgotten Books, and to that magical bridge between literature and our lives.

About the author: Carlos Ruiz Zafón is a Spanish novelist. Born in Barcelona in 1964, he has lived in Los Ángeles, United States, since 1994, and works as a scriptwriter aside from writing novels.

In 2001 he published the novel La sombra del viento (The Shadow of the Wind), his first ‘adult’ novel, which has sold millions of copies worldwide. Since its publication, La sombra del viento has garnered critical acclaim around the world and has won numerous international awards. Ruiz Zafón’s works have been published in more than 40 countries and have been translated into more than 30 languages. www.carlosruizzafon.com

My Review:The Labyrinth of the Spirits is the final book in The Cemetery of Forgotten Books series and it finally brings everything together. A gothic world that is full of suspense and mystery that is sure to draw you in and hold your attention until the very end. Zafon leaves no stone unturned and every loose thread from the previous novels are tied up and secrets that are deeply hidden come to light in this remarkable finale as evil is unleashed in Barcelona. A story of treason and deceit combined with friendship and loyalty mesh together to create a storyline that is sure to keep you up at night. Great finale for a great series.  ** I received a complimentary copy in exchange for my honest and unbiased review. This post contains affiliate links and I will be compensated if you make a purchase after clicking on my links.**