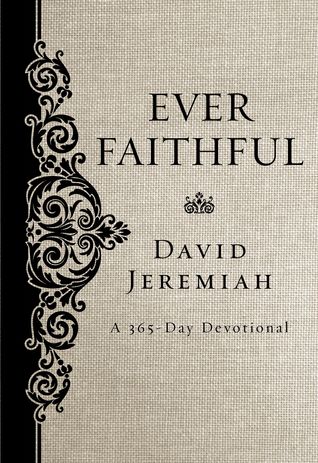 Ever Faithful: A 365-Day Devotional by David Jeremiah was published on May 1st, 2018 by Thomas Nelson. With Dr. David Jeremiah, experience how a clearer understanding of God’s nature and love for you can impact your faith. Ever Faithful, a 365-day devotional, invites you into an intimate, daily relationship with the God who knows you, loves you, and has a plan for your life.

Countless believers look at their faith as a choice they made once, but Dr. David Jeremiah, founder of Turning Point Ministries, understands that your faith is not static—it is a living, breathing relationship with God! Ever Faithful brings you to the daily choice of turning toward the Lord to respond to His invitation of intimacy and love.

Each day includes a Scripture, a short devotional from Dr. David Jeremiah, and an insightful question to help you reflect on God’s love and care throughout the day.
The deluxe, padded Leathersoft hardcover format with a ribbon marker makes a beautiful package and a wonderful gift.Today is the perfect time to start growing closer to the Lord. Why wait? Spend the next year with the Lord, who is Ever Faithful. 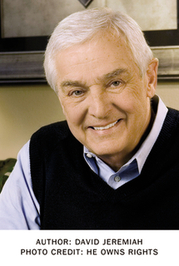 About the author: Dr. David Jeremiah, founder of Turning Point Radio and Television Ministries and senior pastor of Shadow Mountain Community Church, felt God’s calling on his life at a very early age. Born February 13, 1941 in Toledo, Ohio, Dr. Jeremiah was raised in a family deeply committed to ministry. At the age of eleven, Dr. Jeremiah and his family moved to Dayton, Ohio where his father, Dr. James T. Jeremiah, was the Pastor of Emmanuel Baptist Church, and in 1953 became the President of Cedarville College in Cedarville, Ohio.

As Dr. Jeremiah was sensitive to God’s leading in his life, he followed in his father’s footsteps. In 1963, Dr. Jeremiah received a Bachelor of Arts from Cedarville College. In that same year, Dr. Jeremiah married his college sweetheart, Donna Thompson who also was attending Cedarville College as a business major. He went on to earn a Masters degree in Theology from Dallas Theological Seminary in 1967. He completed additional graduate work at Grace University and was granted the Doctor of Divinity degree from Cedarville College in 1981. In 1969, Dr. Jeremiah began Blackhawk Baptist Church in Fort Wayne, Indiana, and developed a Christian school for grades K through 12. In the 12 years he served as pastor, Blackhawk Baptist Church grew from 7 families to 1300 members. He also launched The Bible Hour television program.

Dr. Jeremiah heeded God’s call, and in 1981 he and his family moved to California where he became the senior pastor of Scott Memorial Baptist Church, now Shadow Mountain Community Church. Shadow Mountain Community Church is one of the largest churches in San Diego County. It is also the home of Southern California Seminary and Christian Unified Schools. As Dr. Jeremiah began his ministry at Shadow Mountain, he felt God’s calling to continue the broadcast ministry he started in Fort Wayne. In 1982, Turning Point Ministries became a reality.

Today, Turning Point’s 30-minute radio program is heard nationally and internationally on over 1800 stations and translator/satellators. In recognition of Dr. Jeremiah’s commitment to teaching the Word of God, he received the Broadcaster of the Year Award in 1999 from the National Religious Broadcasters (NRB), in August 2002, received the Award of Merit from the Western Chapter of National Religious Broadcasters for Excellence in Broadcasting and Faithfulness in Service, and in 2006 Turning Point received the Best Radio Teaching Program Award. Dr. Jeremiah has served on the Board of Directors for the NRB since 1996.

Turning Point launched a television program in 1982 in San Diego and went nationwide in 2000. Now seen around the world through cable and satellite technology, as well as on terrestrial stations all across the United States, conservative estimates suggest that close to 200 million homes around the world have access to Dr. Jeremiah’s Bible teaching each week. Turning Point Television offers a half-hour Bible study message and a full hour worship service with the same great preaching. Carried on several national and international networks such as TBN, ION, and INSP, Turning Point Television has most recently been added to Middle East TV Network and BET, the Black Entertainment Network.

Dr. Jeremiah is a sought-after conference speaker for organizations around the country. He frequently speaks at Cedarville College, Dallas Theological Seminary, Moody Bible Institute, Billy Graham Training Center, Phil Waldrep’s Senior Adult Celebrations and numerous NFL, NBA and Baseball chapels. Along with his speaking schedule around the country, Dr. Jeremiah also finds time to fulfill another passion in his life, writing. His books are always gripping and right to the point. Some of his books include Escape the Coming Night, The Power of Encouragement, What the Bible Says About Angels, Prayer The Great Adventure, which brought him The Gold Medallion Award in 1998, God In You, Gifts from God

My thoughts: Ever Faithful: A 365-Day Devotional is a lovely hardback book that is covered in a beautiful gray fabric with gorgeous black detailing. Inside you will find a bible verse, short description, and reflection for each day. A devotional that is insightful and full of meaning. If you are looking to add Bible study to your daily routine this would be a great addition. The perfect gift or lovely treat for yourself. ** I received a complimentary copy in exchange for my honest and unbiased review. This post contains affiliate links and I will be compensated if you make a purchase after clicking on my links.*