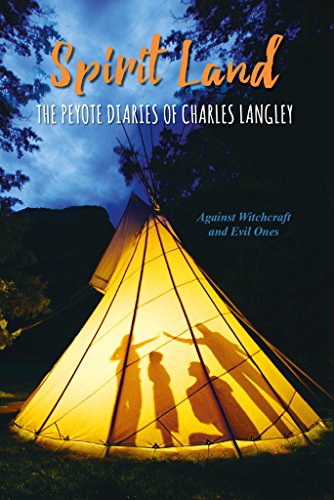 Spirit Land: The Peyote Diaries of Charles Langley: Against Witchcraft and Evil Ones by Charles Langley has a scheduled release date of February 1st, 2018. This is the true story of Charles Langley, an Englishman from London, who became apprentice to a powerful Navajo Indian medicine man in the remote desert of the American Southwest. His first experiences of Navajo witchcraft, divination, healing, and of visions induced by the peyote cactus, proved so remarkable, and so other-worldly, he knew others would find them hard to believe. Encouraged by the medicine man Blue Horse, and using skills honed as a top British journalist, Langley began a detailed diary from which this book has been crafted.

Readers will learn of the daily fight against witches and witchcraft. Of skin walkers, who are human shape shifters the Navajo believe can turn themselves into animals and birds; of visions, and of extraordinary feats of divination and healing, as well as fascinating insights into the unique culture of the Navajo tribe. As Blue Horse’s apprentice, Langley finds himself inhabiting a parallel world in which much that his western upbringing and education scoffs at as impossible, becomes an everyday reality.

Eventually, he realizes he must choose between his big city existence with its comfortable preconceptions, or accept that the terrifying world of Navajo witchcraft is real and, despite the risk, he must explore it further.

About the author: Charles Langley is the former news editor at the London Evening Standard, Europe’s best-selling evening newspaper. Raised in England, he set out across the United States in 2003 to drive from Florida to California but wound up on a Navajo reservation in Arizona. At a peyote medicine ceremony he met a shaman named Blue Horse. After earning a degree in anthropology at the University of New Mexico in 2007, he became Blue Horse’s apprentice and began compiling an archive on the workings of Navajo traditional medicine. Langley and his wife, nuclear physicist Andrea Palounek, live in New Mexico.

My thoughts: Spirit Land: The Peyote Diaries of Charles Langley: Against Witchcraft and Evil Ones by Charles Langley is a powerful and intriguing read that is full of mystery. This fast-paced read is sure to grab your attention taking you into a world that is unknown to many. Langley shares his story of what he finds when he decides to research and investigate the Navajo Indian Rituals. As Langley follows medicine man Blue Horse he soon discovers a world unlike any other. Experience the mystery and unknown as Langley reveals his finds in Spirit Land a book that is sure to peak your curiosity.    ** I received a complimentary copy in exchange for my honest and unbiased review. This post contains affiliate links and I will be compensated if you make a purchase after clicking on my links.**