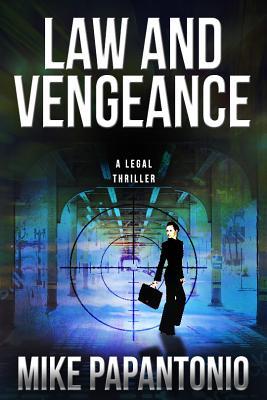 Law and Vengeance: A Legal Thriller by Mike Papantonio has an expected publication date of September 26th 2017 by Select Books (NY) and is a legal thriller. Gina Romano is a highly successful trial lawyer with Bergman/Deketomis, a firm dedicated to protecting the public by exposing and penalizing corporate crooks and their allies in government. Well into her thirties, Gina hasn’t overcome the anger and defensiveness resulting from a bizarre and traumatic childhood. As she contemplates whether to marry solid, attractive and loyal veterinarian Bryan Penn or to send him packing, the murder of a friend and mentor, Angus Moore, turns her life into a quest for vengeance. In consort with partner Nick Deketomis, Gina runs headlong into a life and death struggle against weapons manufacturers, a gun rights lobbyist, psychopathic Chicago police, a hi-tech genius assassin, and the U.S. Department of Justice. Still, the most formidable and dangerous enemy she faces is herself.

About the author: Mike Papantonio is a senior partner of Levin Papantonio, one of the largest plaintiffs law firms in America, that has handled thousands of cases throughout the nation involving pharmaceutical drug litigation, Florida tobacco litigation, litigation for asbestos-related health damage, securities fraud actions, and other mass tort cases. “Pap” has received dozens of multimillion dollar verdicts on behalf of victims of corporate corruption.  Mr. Papantonio is one of the youngest attorneys to have been inducted into the Trial Lawyer Hall of Fame. In 2012 Mr. Papantonio became President of the National Trial Lawyers Association, one of the largest trial lawyer organizations in America. For his trial work on behalf of consumers Papantonio has received some of the most prestigious awards reserved by the Public Justice Foundation, The American Association for Justice, and the National Trial Lawyers Association. Mr. Papantonio is an author of four motivational books for lawyers. He is also co-author of Air America: The Playbook a New York Times Political Best Seller. Mr. Papantonio is the host of the nationally syndicated radio show Ring of Fire along with Robert F. Kennedy, Jr., and Sam Seder. In addition to the radio program, Mr. Papantonio also hosts Ring of Fire when it airs on the Free Speech TV network. Mr. Papantonio has conducted hundreds of recorded interviews with guests, including Dan Rather, Helen Thomas, Howard Zinn, Arianna Huffington, Mary Chapin Carpenter, Bernie Sanders, David Crosby, Merle Haggard, Morgan Spurlock, John Edwards, Bill Moyers, Rickie Lee Jones, Alanis Morissette, Pete Seeger, Jackson Browne, Chuck D from Public Enemy, Henry Rollins, Ted Sorensen, and Elizabeth Kucinich. His role on Ring of Fire is featured in the movie, Jesus Camp, which was nominated for the 2007 Academy Award for Documentary Feature. Mr. Papantonio is also a political commentator who frequently appears on MSNBC, Free Speech TV, RT America Network, and Fox News. WEBSITE  GOODREADS AUTHORS PAGE

My thoughts:  You will not be disappointed when you read Law and Vengeance: A Legal Thriller with its action pack suspenseful plot line. I was hooked after reading the first few pages. Papantonio writes with his experience as a guide making this novel realistic and very believable with well thought out characters, a very developed story line and passion for justice that comes from working in a law firm. I did not read the first book in this series but I do feel that this book can be read as a standalone. I love that the characters have developed backstories that help to guide you through the reasons behind their choices and how they react to present day events. Papantonio brings the climax to a satisfying conclusion in this must read for any lover of crime, mystery, thriller and suspense, political, and law and order. ** I received an advanced reader copy in exchange for my honest and unbiased review. **